Culture » Conferences » Cyprus. The grief of an island

Cyprus. The grief of an island

Presentation of the book written in French by the Franco-Greek journalist Angélique Kourounis,“Cyprus. The grief of an island " on Wednesday, September 29 at 7:00 p.m.  -  Hambis Municipal Printmaking Museum. Presentation in French with translation in English.

A land at war and in search of peace: this is the inescapable reality of Cyprus, this island of Aphrodite wounded in the heart since 1974, still divided today. The beauty of its seaside sites, the grandeur of its monuments and the treasures of its past cannot mask this scar which eats away the souls of the inhabitants on both sides of this land at the crossroads of Europe and the East.

Cyprus is the result of a mixed history, dominated by its Greek heritage. This island, the point of which is aimed at the Middle East, like a spear resting on the Mediterranean, has always been coveted. Cypriots are survivors, used to living on the fringes of Europe.

This little book is not a guide. It is a moment of truth. An attempt to recount the suffering of a people without ever ceasing to glimpse the glimmer of a reconciled future. 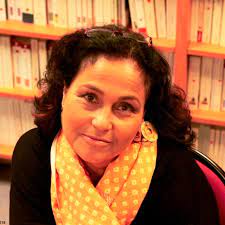 Angélique KOUROUNIS is a journalist, author and film director.

Among the latest reports she has produced: "Catch me if you can", "Go blow yourself up among the Greeks", "The mutants of the atom" and "The Route of the Roma".

In 2016, she won the Young Audience Award at PriMed - the Festival de la Méditerranée en images for her documentary “Golden Dawn, a personal affair”.